Mazda have shown a concept car called the MX-Micro Sport at the 2004 NAIAS car show in Detroit. What struck me immediately was the overall similarity of this car to the new MINI.

The Mazda also has dual-centre rear exhausts, a 6 speed gearbox and rides on 17in 205/50 wheels compared to the MINI’s 17in 205/45. Granted that there are also some features that do not match (being 4-door for one thing) but to me the entire form and function of this car reeks of MINI.

The front dam, the chunky, oversized wheels, the thickness of the rear glasshouse and the pert rear view - with a few Mazda family styling cues thrown into the mix. 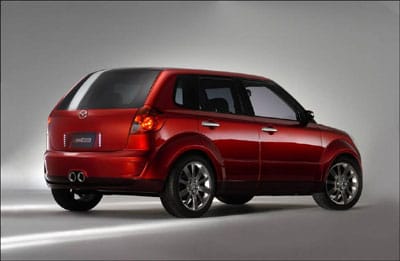 That’s not to say that a little bit of competition isn’t a good thing. Mazda should build this car, they’ll probably sell quite a few, at least in Japan, Australia and more importantly - in the USA. From what I’ve heard, the MINI has sold extremely well in a country that is supposed to only like ‘the biggest and baddest’ of everything. This new Mazda should do the same.