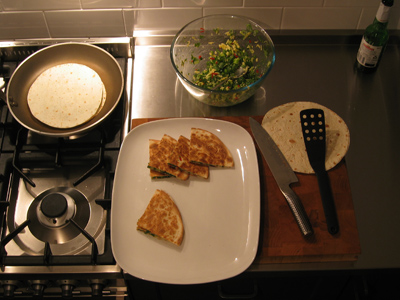 There’s nothing more Australian than a long weekend. So, appropriately we cooked up some Quesadilla’s on Sunday night for the first time in ages. I stole this recipe from that pommy bloke on the tellie a few years back and have turned it into a bit of a Sunday afternoon tradition. They’re pretty easy to make, main issue is trying to cut up the chilli’s without getting too much chilli oil on your hands. Recipe after the jump.

Grab a big pack of burritos, a bunch of coriander, another of shallots, a half dozen large chillis (green or red cayenne peppers, available everywhere) and some bighty cheddar cheese.

To prepare the chillis, cut off the stalk and then halve lengthways. Using a teaspoon, strip out the seeds and white membranes to leave just the chilli flesh. Wash this thoroughly under some cold water. Washing is worth it as it gets rid of most of the chilli heat and leaves the good, tasty bit behind. Just be careful when handling chillis: their oil will get right into your skin and tends to stick around for ages no matter how hard you try to wash your hands, you might want to do this bit wearing some rubber gloves until you get the hang of it.

Grab a large bowl and add equal parts of chopped coriander and shallots. Chop your chillis and thrown into the mix then add enough grated cheese to bind the mixture, idea being that the cheese will melt the glue the two burritos together.

Place one burrito down and add a decent handful of mixture in the middle. Place another burrito on top and squash the two together. Heat a large frypan up and chuck on your first quesadilla. Your pan should be hot enough to heat the mixture through but not too hot as they can quickly burn. You should be able to pat the top burrito down or use a spatula to lift an edge to check how things are going. I’m not sure that there is a general rule other than that smoke usually means you’re burning it! As the burritos cook they also harden up so it should be easy to tell when its time to turn it over.

When one side is done, carefully turn it over using a spatula and cook the other side. Once cooked through take out of the pan and cut into quarters.