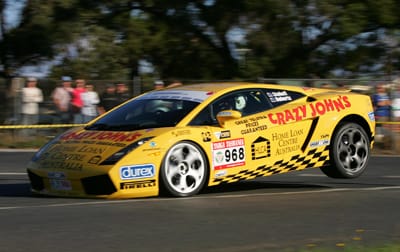 Where else could you see a pair of Gallardos at full noise on some of the world’s best driving roads. Driven pretty hard from the looks of it too, as the above Gallardo crash landing plus chin scrape testifies. Welcome to Targa Tasmania 2005.

This year perennial favourite Jim Richards is driving a Porsche 911/996 GT3 (pic below) against a hungry Paul Stokell in a Lamborghini Gallardo (pic above). I’m intrigued that Richo has again decided to handicap himself with a 2WD car and a non-turbo one at that, especially after the weather turned so horribly against him last year (rain, snow etc).

After the first couple of stages, Richo leads however it’s early days. With clear weather, nothing should be able to touch him but if it rains, as it almost always does, who knows who’ll win. A hard charging 4WD Italian perhaps? 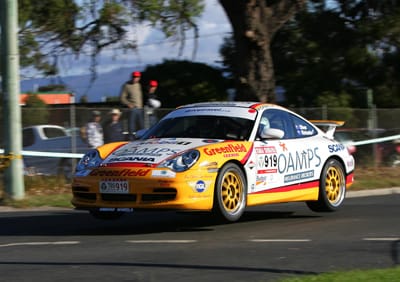