Results from Day 1 were revised after an enquiry from several competitors. After a review of times, Tasmanian locals John and Jason White driving an R34 Nissan GT-R V-Spec II were declared leaders after the days stages with a lead of 16s from Jim Richards in his Porsche 911 GT3. Paul Stokell was placed third after complaining of some ABS troubles in his Lamborghini Gallardo.

Day 2 opened with perfect weather conditions, which allowed competitors to stretch their legs over the 73 km’s of competitive stages between Launceston and Hobart. At the end of the day, Paul Stokell had taken the lead in the Gallardo, leading from Richards, Tony Quinn in a Porsche 911 Turbo (996) follwed by the White duo’s GT-R. Go Gallardo! 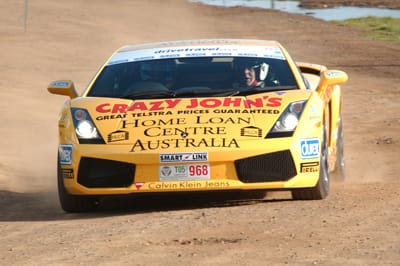