The mini is dead, long live the nano 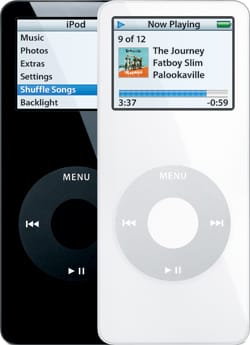 Apple also chose the event to finally launch iTunes for mobile phones with the Motorola ROKR E1 phone. Does anyone else see the irony when comparing this phone’s design to that of the iPod nano? Even if this phone was made available in Australia, I’d much rather have a nano in addition to a decent looking phone. Apple’s design input appears to have been limited to the software, plus that little iTunes-logo’d button. Me, I’d rather see a iPod with phone features rather than a phone with iPod features.

We also have a new version of iTunes today, version 5.0 with some interface tweaks (it’s been ‘streamlined’), a new ‘Smart Shuffle’ feature, parental controls (yikes), playlist folders and Outlook syncing for Windows users.