On Friday I was lucky enough to attend a ‘dyno night’ organised by some new MINI friends. For a small fee our cars were each given a couple of runs on the rollers to see what kind of power they were making at the wheels. 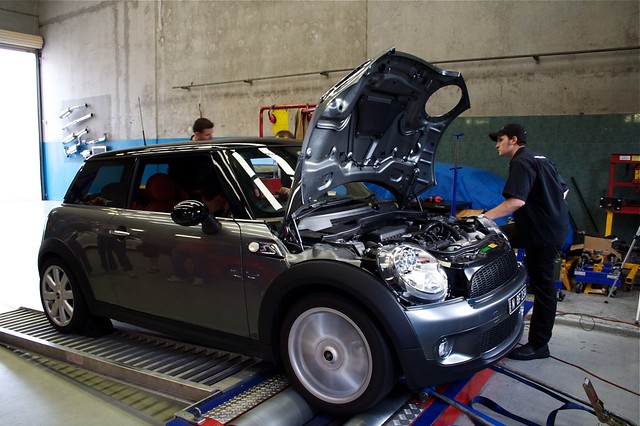 The results were quite interesting: some modified cars were putting out less power than otherwise stock examples of the same model, another was tested with a couple of different air filters fitted to see the difference each would make when fitted - the aftermarket one ended up costing about 11kW. We ended up with 18 or so cars: mostly MINIs, a couple of VWs and a Civic Type-R.

After a few practice runs to let the operator get used to the steptronic gearbox in our R56, she ended up recording a respectable peak of 116kw at the wheels. 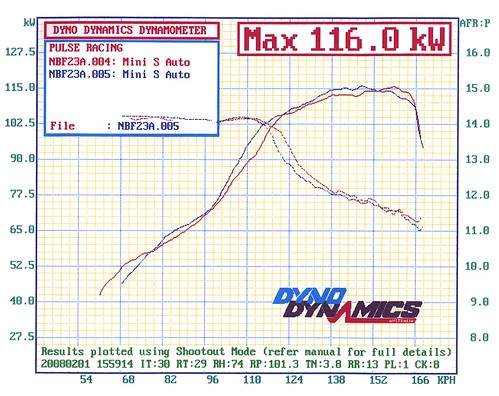 Initially it seemed hard to get a good run without the gearbox shifting up, after some trial and error I think he ended up using 4th gear in DS+sport mode and only then by slowly feathering the power in before flooring the pedal. You can see some evidence of this on the power curve above, slowly feeding on the power before opening it up and letting the turbo do its job. The top of the power curve seems pretty flat, quite different to the straight diagonal plots I saw for some R53 supercharged Cooper S’, evidence of a much wider power band for the R56’s turbo.

Biggest hitter on the night was a mkV VW Golf GTi that recorded a peak of 141.7KW, with an R56 with the optional JCW kit recording 129.7KW right behind it.

Thanks again to MADalways and Snapper over on mini mods for organising and thanks to Pulse Racing in Menai for having us.