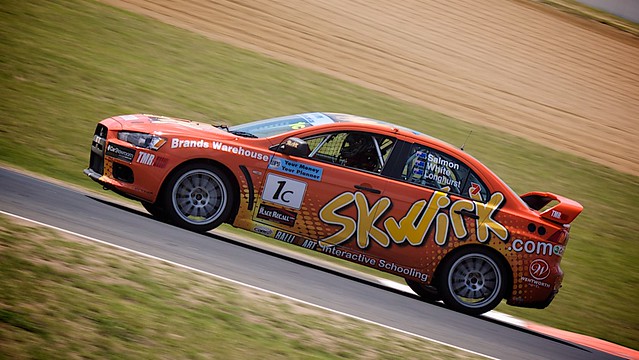 On a whim, I went for an early drive Sunday morning, rising at four and heading out of the city and across the mountains to Bathurst to watch the annual twelve hour race for production cars, aka the Bathurst 12 Hour. Had a brilliant run across the Bells Line of Road though light rain, very thick fog and zero traffic, arriving at the track just after the start.

The race ended up being fairly straight forward, with the gun TMR two car team locking out the top two spots almost all day, the R.Salmon / T.Longhurst / D.White car taking top honours ahead of the sister Evo X of G.Crimp / T.Ricciardello / S.Kostera. There was some concern about the reliability of the newer Evo X compared to the tried and trusted Evo IX models that dominated this race last year and almost every Australian tarmac rally held in the past twelve months, though in the end there was no stopping the factory team from repeating their 2008 one-two victory.

Some other teams running Evo Xs did have a few dramas, notably the Bob Pearson ProDuct car of J.Bargwana / S.Knight / B.Jones which encountered various fuel pickup, electrical gremlins and some brake issues very late in the race, all up requiring an incredible nineteen (19!) pitstops during the race whilst still coming home in a tidy third place. It was a race punctuated by incidents and a series of eleven safety car periods, one where an accident at the top of the mountain blocked the track for quite some time while the debris was cleared away, the field coming to a complete standstill - with many cars switching off their engines - until the track was cleared again for racing.

I spent the last forty-five minutes of the race out the back of the TMR garage watching the team, co-drivers, sponsors and car owners sweating over which car was going to make it onto the top step of the podium. From this vantage it seemed like they decided to run in formation up until the final pitstop, after which it was game on the for lead in the run to the chequered flag. Very exciting to watch the team preparing for those final stops, then agonising as those final minutes ticked over toward the twelve hour mark.

The thing I like most about this kind of production car racing is that even when all the cars were out on the track, you could still tell what kind of car each team was running by the cannibalised road car sitting in or behind their pit garage. Each with various suspension parts and under body trim pieces hanging loose or scavenged to keep their racers on the track.

Took a tonne of photos, easily filling my meagre 6gb supply of CF cards. I really do need to invest in more cards, some decent lenses and a monopod before the next race meeting to make things easier for myself.